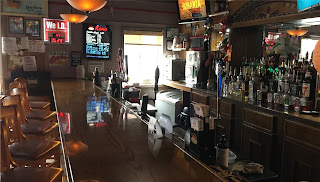 Rockaway Beach MO - After a few people asked me if I know anything about what was going on in some of the bars and eateries in Rockaway Beach, I decided to take a run down there and see what was what.

AMVETS  - My first stop was a local American Veterans club that looked closed to me. There was also a sign that stated that fact.

Note that they normally open at 3PM, according to one website page, you you might want to give them a call to find out the real deal. They can be reached at (417) 302-5201.

Pizza Cellar - I stopped at the local Pizza Cellar and found the doors were open. When I approached one of the employees, I was told that they were 'sorta' open but were also on a waiting and see what the owners wanted to do. I didn't ask, but had the impression that I could have ordered a beer or a pizza.

Dockside Pub - I was able to talk with a spokesperson who informed me that as of that 'moment', they were open for business. They also informed me that while the City of Rockaway Beach had not said they had to close, that there were still constraints on the number of people that would be permitted. I Was told, 'sure', that I could order a drink.

The bottom line is that you are likely to get some service somewhere in Rockaway Beach, it just might change with time. Much of what is happening is happening due to fears that, in my opinion, are largely baseless.
Posted by Dan Owen at 1:49 PM

Dan Owen
Forsyth, Missouri, Southwest MO., United States
I am a simple man with a head full of sand (trust me on that). I'm decreed from SIU with a major in microbiology. My current interests include gardening, photography, blogging, boating, weather and hiking!